It’s that time of year again, the Union Square Farmer’s Market is open and beginning to have fresh vegetables! Well some fresh vegetables. It is still early in the season and there was some snow last weekend. But although the pickings are slim, it’s good to be back!

One vegetable in particular grabbed my attention, the leek. I have never cooked with leeks before and knew almost nothing about them except it’s the baton that Farfetch’d wields in Pokemon. So no real world applications there. But I did some internet research and found that leeks are a vegetable that’s rising quickly in popularity. And paired with spring’s favorite vegetable asparagus, it is a wonderful addition to our repertoire. And don’t think I’m weird by blackening or charring food. It brings a great new taste to the dish! I’ll admit it’s weird when I do it to popcorn…But it REALLY works with leeks. I promise! 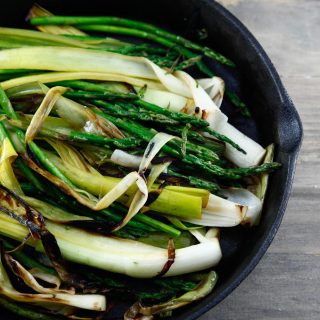